Synchronicity is the experience of two or more events as meaningfully related, where they are unlikely to be causally related. The subject sees it as a meaningful coincidence. The concept of synchronicity was first described by Carl Jung, a Swiss psychologist, in the 1920s. 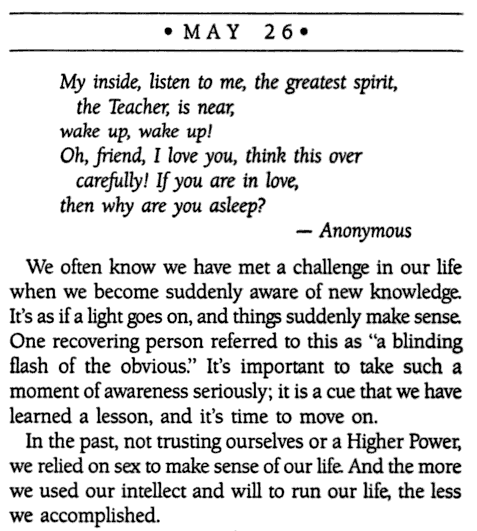 Today is off to a good start.  I woke up and headed to the “Wake Up AA Group”.  There is an Alcoholics Anonymous meeting in Severna Park, MD not far from my house that meets daily @ 6:00 AM.

On the way home, I checked-in to Sexaholics Anonymous on the 7:30 AM DSR teleconference meeting. Notice the coincidence?

If that’s not clear, I’ll share another story.  Yesterday, my 10 year old daughter was walking around the house singing “Leaving on a Jet Plane“.  I quickly pulled up my favorite songs from www.grooveshark.com and played John Denver’s hit song.  Then found a nice YouTube video of him singing with Cass Elliot (click here).

I explained to my daughter that John Denver practically wrote how he would die in this song, because of a plane wreck he piloted.  In her innocence, she asked, “what happened to Cass?”.

Here’s another example, Dr. Carl Jung wrote a Letter To Bill Wilson in 1961.  He said, “I had no news from Roland H. anymore and often wondered what has been his fate”.  As most of you know, Bill W. is the founder of AA and Roland was a close friend of Bill who was very influential in the pioneering days.  Read more