Did you know that both words have the same letters?

There is a famous saying, “take the cotton out of your ears and put it in your mouth.  Listen to learn, and learn to listen”.

If you are new to Sexaholics Anonymous, it is suggested that you listen to others in the beginning before you start sharing.  This way you can learn about the various suggested guidelines and personality of the 12 Step meeting.

Generally, every 12 Step program is different and you will find that just about every group / meeting is slightly different.  This is true for obvious reasons.  SLAA & SAA will describe different forms of sexual sobriety than SA.  Whereas, AA and NA will often be too embarrassed to talk about about the ‘elephant in the room’.

When I started SA, around 1995 (give or take a year, it’s a little foggy, being it was so long ago) I remember folks suggesting going to Alanon as a supplement to the “S” fellowship because there were more meetings to choose from.  The nice thing about Alanon is that they accept just about everyone and are not as strict about specific addictions and have some of the best phone meetings.  In fact, most Alcoholics say they first stopped drinking and then started going to Alanon to learn more about relationships.

Interestingly enough, a friend of mine gave me a copy of the AA Grapevine over 10 years ago and guess what was on the cover?  “Now about Sex”.  The stories that followed were all about relationships. 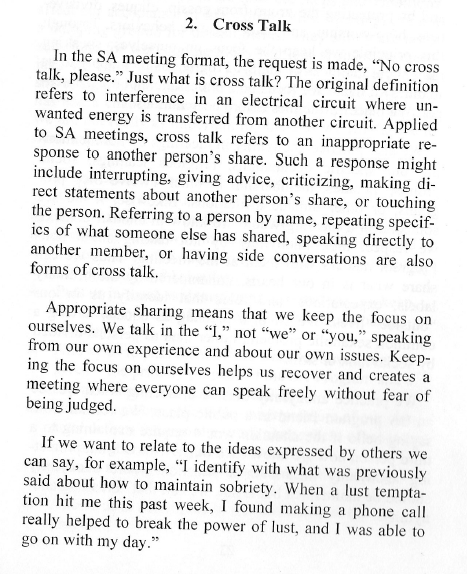 Unfortunately, when you join a SA Phone Meeting, there is a good chance that you may witness some strange behavior.  The attendance ranges from 5-50 callers with an average around 20 people.

The other day, during the 0830 business meeting I shared the following observations: