Every time I light a candle, I believe God enters the room.  It offers a real sense of peace and serenity for me!

Do you remember that old Police video – Wrapped Around Your Finger? Click here 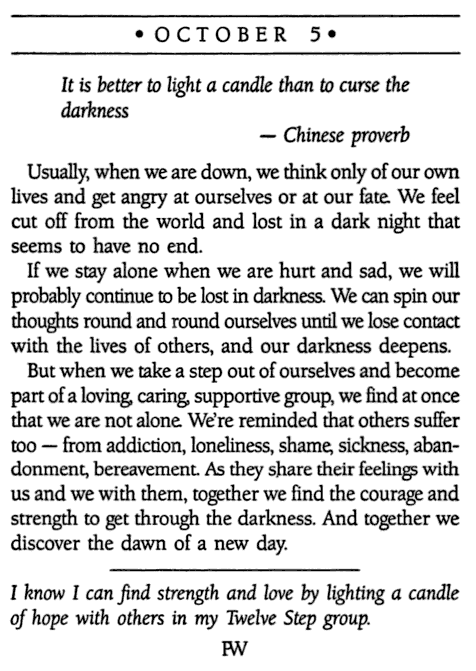 Why do Christians burn candles in Church?
As with many things in Christianity, lighting a candle during worship probably began not as a ritual, but from a practical reason, and as the years passed well meaning believers sought meaningful symbolism in what they did.

I will do three things in this response:
1. Offer some understanding of what Christians believe regarding candles in worship
2. Give my understanding of the historical origin
3. Offer personal opinion on the use of candles, symbolism and how we worship

Most clergy in a liturgical church will tell you that the candle represents Jesus as the Light of the world, or that the light and fire represent the presence and power of God (similar to the pillar of fire that led the children of Israel in the exodus). Some might say that each believer lights a candle prior to worship to symbolize his/her life as a offering, being burned up in service to God. All of these (and many more could be added) are nice gestures of symbolism. Christian faith is filled with symbolism, all of which is helpful to instruct us and to help us understand our faith in a way that goes beyond the intellectual level. Anything you do, like getting on your knees in prayer as an act of humility, can be very helpful and meaningful for communicating nuances of our faith beyond the intellect.

In the Orthodox Church each member is encouraged upon entering the worship place to purchase a small votive candle, light it, and place it in a small sandbox. There are various beliefs and reasons for why Orthodox believers do this – as with all symbolism, one individual might be taught an angle on a symbol that is not quite correct, yet their particular practice becomes meaningful. They then pass along their unique view to others and the process of growing symbolism continues. No church looks back in history more than the Orthodox Church for rationale and explanation of practice. They point to early references (like Eusebius, circa 360 AD) of candle usage, but even by this time traditions for symbolism had already developed. But how did the use of candles start?

I am not aware of any clear historical references, but there are some things we do know that can allow us to make some fairly good assumptions.

While it is true that Judaism and other religions in the ancient world used candles in symbolic ways, candles were used principally as a light source in ancient times. If Christians met before or after dark candles would have been used in the meeting place or home just to keep from stumbling around. When Christians met in the dark Roman catacombs candles would have been used for a light source. As people arrived they most likely would have placed all candles or wicked lamps in one place – it would not be safe for every person to carry and handle a fire source – tunics and robes could easily catch on fire. Ten or twenty candles sitting on a stand would give off significant light for an entire room.

This is probably how the practice of bringing, or lighting, a candle started – in a most natural way, not initially for symbolic reasons. The same can be said for many other Christian symbols like icons and prayer beads. Read more