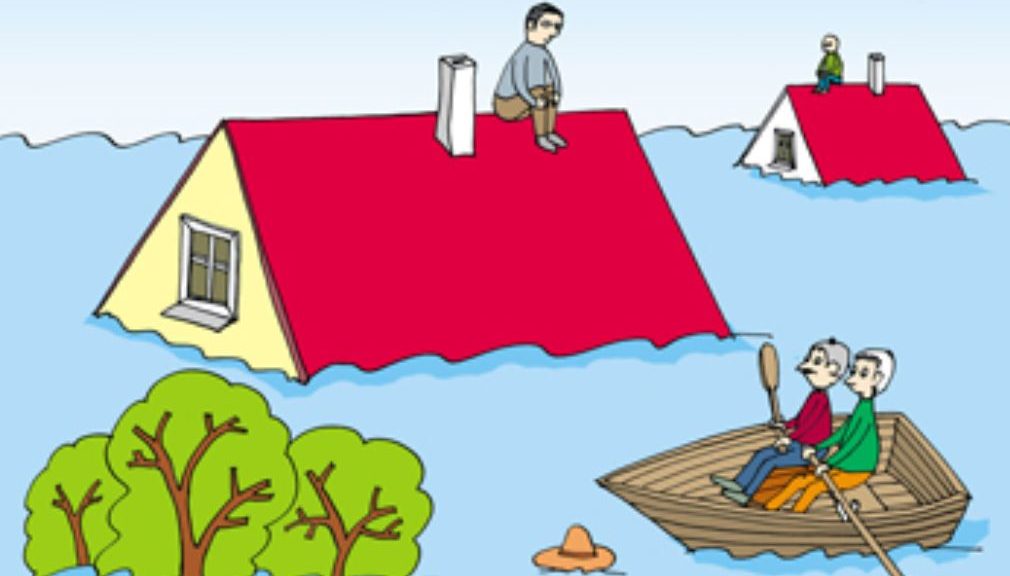 THE PARABLE OF THE FLOOD
A man was trapped in his house during a flood. He began praying to God to rescue him. He had a vision in his head of God’s hand reaching down from heaven and lifting him to safety. The water started to rise in his house. His neighbor urged him to leave and offered him a ride to safety. The man yelled back, “I am waiting for God to save me.” The neighbor drove off in his pick-up truck.

The man continued to pray and hold on to his vision. As the water began rising in his house, he had to climb up to the roof. A boat came by with some people heading for safe ground. They yelled at the man to grab a rope they were ready to throw and take him to safety. He told them that he was waiting for God to save him. They shook their heads and moved on.

The man continued to pray, believing with all his heart that he would be saved by God. The flood waters continued to rise. A helicopter flew by and a voice came over a loudspeaker offering to lower a ladder and take him off the roof. The man waved the helicopter away, shouting back that he was waiting for God to save him. The helicopter left. The flooding water came over the roof and caught him up and swept him away. He drowned.

When he reached heaven and asked, “God, why did you not save me? I believed in you with all my heart. Why did you let me drown?” God replied, “I sent you a pick-up truck, a boat and a helicopter and you refused all of them. What else could I possibly do for you?” Read more

My first meeting was actually in the fall 1990 when I attended Narcotics Anonymous. Two years later I discovered Alcoholics Anonymous and two years after that I found Sexaholics Anonymous. It’s been my experience (ESH) that the 12 Traditions are extremely powerful yet often misunderstood. So, I decided today to capture the “cartoon” version which helps put things in perspective (read more).

A picture is worth a thousand words!

A fellow was stuck on his rooftop in a flood. He was praying to God for help.

Soon a man in a rowboat came by and the fellow shouted to the man on the roof, “Jump in, I can save you.”

The stranded fellow shouted back, “No, it’s OK, I’m praying to God and he is going to save me.”

So the rowboat went on.

Then a motorboat came by. “The fellow in the motorboat shouted, “Jump in, I can save you.”

To this the stranded man said, “No thanks, I’m praying to God and he is going to save me. I have faith.”

So the motorboat went on.

Then a helicopter came by and the pilot shouted down, “Grab this rope and I will lift you to safety.”

To this the stranded man again replied, “No thanks, I’m praying to God and he is going to save me. I have faith.”

So the helicopter reluctantly flew away.

Soon the water rose above the rooftop and the man drowned. He went to Heaven. He finally got his chance to discuss this whole situation with God, at which point he exclaimed, “I had faith in you but you didn’t save me, you let me drown. I don’t understand why!”

To this God replied, “I sent you a rowboat and a motorboat and a helicopter, what more did you expect?” Read more

I think about this joke a lot more than I wish I did.

Hold this thought gently as you read on: Despite centuries of science, technology, and evolution; regardless of the miracles of medicine, psychology, and social development; irrespective of progress in all its forms, how you feel today probably has as much to do with whether the sun came out as anything else.

An old joke has stuck with me since I heard it, what? Twenty-five years ago, now? It goes like this:

A storm descends on a small town, and the downpour soon turns into a flood. As the waters rise, the local preacher kneels in prayer on the church porch, surrounded by water. By and by, one of the townsfolk comes up the street in a canoe.

“Better get in, Preacher. The waters are rising fast.”

Still the waters rise. Now the preacher is up on the balcony, wringing his hands in supplication, when another guy zips up in a motorboat.

“Come on, Preacher. We need to get you out of here. The levee’s gonna break any minute.”

Once again, the preacher is unmoved. “I shall remain. The Lord will see me through.”

After a while the levee breaks, and the flood rushes over the church until only the steeple remains above water. The preacher is up there, clinging to the cross, when a helicopter descends out of the clouds, and a state trooper calls down to him through a megaphone.

“Grab the ladder, Preacher. This is your last chance.”

Once again, the preacher insists the Lord will deliver him.

And, predictably, he drowns.

A pious man, the preacher goes to heaven. After a while he gets an interview with God, and he asks the Almighty, “Lord, I had unwavering faith in you. Why didn’t you deliver me from that flood?”

God shakes his head. “What did you want from me? I sent you two boats and a helicopter.”

Frankly, I think about this joke a lot more than I wish I did. This is, I suspect, because I have never fully absorbed the lesson it has to teach me. The joke popped into my head this morning as I read an opinion piece in the Christian Science Monitor about life in Finland.

Helsinki is rather dull, the article’s author, Trevor Corson, reports, and this is how the Finns like it. In exchange for the security of things like free health care and education, the Finns are apparently content to forgo many of the first-world luxuries that living life in the Rat Race affords us Americans. Also, the article reports, most Finns decamp the cities for austere cottages in the woods for five weeks each summer, where they life simpler still. Read more