Yom Kippur, also known as Day of Atonement, is the holiest day of the year in Judaism.  Read more  Interestingly enough, while I was sitting in synagogue yesterday with my wife and daughter, I noticed how many similarities I had with the following list: 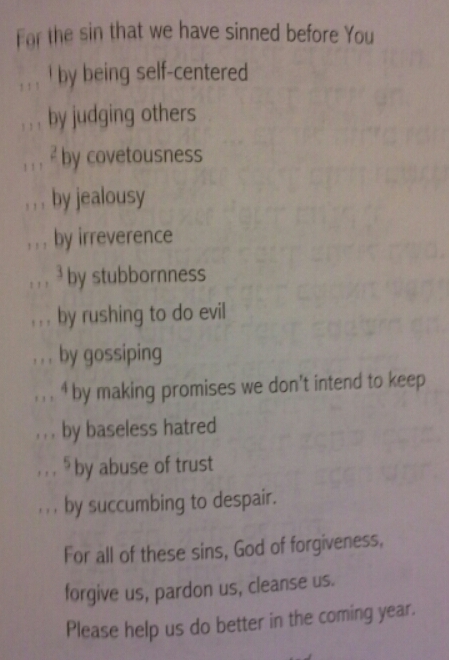 Atonement in Christianity: In western Christian theology, atonement describes how human beings can be reconciled to God. Atonement refers to the forgiving or pardoning of sin in general and original sin in particular.  Core human frailties. 12 Step folks spend a lot of time discussing Christian holidays – Xmas, Easter, etc. However, little do they know, Judaism pre-dates Jesus. ALL of Alcoholics Anonymous began with the Bible.  And obviously SA came from AA.

How to Be Humble:
“In reality there is perhaps no one of our natural Passions so hard to subdue as pride. Disguise it, struggle with it, beat it down, stifle it, mortify it as much as one pleases, it is still alive, and will every now and then peep out and show itself…For even if I could conceive that I had completely overcome it, I should probably be proud of my humility.” (Benjamin Franklin)

“It’s hard to be humble,” says an old country song, “when you’re perfect in every way.” Very few people, of course, actually think they’re perfect in every way, but it can still be pretty hard to be humble, especially when you live in a society that encourages competition and individuality. Even in such a culture, however, humility is an important virtue. Learning to be humble is of paramount importance in most religions and spiritual traditions, and humility can also help you develop as a person and enjoy richer relationships with others.

• Keep in mind that being humble has many benefits. Humility can help you be more content with your life, and it can also help you endure bad times and improve your relationships with others. It’s also essential to being an effective learner. If you think you know it all, you won’t be open-minded enough to seek out new knowledge. Humility is also, somewhat counter-intuitively, an excellent tool for self-development in general. After all, if you feel superior, you have no incentive to improve. Most of all, being humble allows you to be honest with yourself.
• Pretending to be humble isn’t the same as being humble, and often people who pretend to be humble do it in order to seek out praise. Other people will recognize this, and even if you fool some, you won’t derive the same benefits as you would through actually developing humility.
• Similarly, don’t confuse being humble with being sycophantic (being overly-praiseful of someone for your own profit). This is a common misconception, but the two attitudes are completely different.

Lust is all a lie. It’s completely fake. A big scam

U got that right!!

It pisses me off when I see people with these rich, lavish lives

Dosent bring them happiness only love from people does

People are getting rich at our expense

They are drug dealers .. Semi legal

I am a Sex addict and member of Sexaholics Anonymous. I started attending SA meetings in 1994.

I am powerless over voyeurism and wanting to be lusted after.  I also am a drug addict and alcoholic. I began Narcotics Anonymous in 1990.

So, what exactly is voyeurism? Merriam Webster defines it as a person who gets sexual pleasure from secretly watching other people have sex; one obtaining sexual gratification from observing unsuspecting individuals who are partly undressed, naked, or engaged in sexual acts; one who habitually seeks sexual stimulation by visual means; a prying observer who is usually seeking the sordid or the scandalous.

I particularly enjoy how Roy K. (founder of SA) describes “The Problem…Our habit made true intimacy impossible. We could never know real union with another because we were addicted to the unreal. We went for the “chemistry,” the connection that had the magic, because it by-passed inti­ macy and true union. Fantasy corrupted the real; lust killed love. First addicts, then love cripples, we took from others to fill up what was lacking in ourselves. Conning ourselves time and again that the next one would save us, we were really losing our lives.”

He goes on to say, “I never suspected that the whole process from the very beginning was creating a deadly false reality and short-circuiting my ability to have normal relationships with anyone, let alone wife and children. Without sensing what was happening anywhere along the line, the great love “maker” had become the great love cripple.” (WB pg. 16).

Thank God, our sobriety definition calls for “progressive victory over lust”. Moreover, my conscience is very much aware today when I start to cross certain lines. There are many bottoms I have never hit, yet. However, YET stands for “Your Eligible Too”

According to the Bible, it would appear that way. For example, in the following helpful verse, it appears that lust is limited to men only.

“But I say to you that everyone who looks at a woman with lustful intent has already committed adultery with her in his heart.”  (Matthew 5:28)

Needles to say, I believe most of our historical books and references were written from the standpoint of a man— male superiority.

Here is another excerpt that Roy K. discusses as a useful technique.

“Learn to give instead of take. This technique worked on lust too. Whenever I’d catch a likely image in the corner of my eye, instead of obeying the impulse to look and drink, I’d keep looking straight ahead while praying for that person. It might be a simple, God bless her and give her what she needs. Or, depending on the intensity of the lust stimulus, it might be more fervent: God bless her and make her a blessing”(SA WB pg. )

So, my conclusion is…

…I typically erase, delete and even burn the images after the climax and high.

Once the “instant gratification” is satisfied, remorse, shame and guilt are soon to follow!

It’s been my experience that acting out/in generally boils down to my desire to fantasize, escape reality because I feel bad.

This is such a big waste of time and money!  Our dis-ease (discomfort & delusional thinking) is very patient. It wants us dead.

I believe there is a little bad in the best of us. Recovery is all about action. We cannot sit around waiting for good things to happen. We have to carry the body and the mind will follow.

Sometimes quickly, sometimes slowly. But it will always materialize if we work for it.

I also believe you cannot just “gress”. You are either progressing or regressing!

AA has taught me that it is almost impossible to explain alcoholism to a family member who is not alcoholic.

“To Hell and Back—When I became a member of Alcoholics Anonymous in September 1988, I wasn’t sure that the program would work for me. But I was driven by the fear of what might happen to me and my children if I didn’t give it a try.

Fear was probably the very thing I needed to bring me to the point of surrender necessary to recover. When staying sober became my number-one priority, I started to do things differently. I went to many meetings, I got a sponsor, I created a network of people in recovery around me, I became a part of that same network by working with others, and sobriety became my — Tena W (Read more)

If I got a nickel for every time my wife or parents told me I needed “medication”, I would be a millionaire.  I personally believe the “bi-polar & manic depressive” label is overused in the mental health profession.  Even television now advertises all kinds of miracle drugs for insomnia, depression, etc.

My experience is that it is very important for the addict to be “open minded” and at least consider the advice offered by therapists.  I personally have met with over a dozen psychologists, psychiatrists, LCSW and marriage counselors.  I have even taken various prescriptions since 1995.  The results are obvious, I’ve stayed clean and sober for over 18 years and married for over 12 years.  So, I believe it works!

Nevertheless, at this point taking drugs is like following some of the suggestions in the 12 step program.  Most people I know, have told me I could benefit.  But then I have also received extreme recommendations and perhaps unusual advice from sponsors.  For example, eating only certain foods and vitamins, getting more involved in the bible, practicing certain vipassana dharma meditation techniques, etc.  Yet, when I examine their life, they have gross handicaps.

So, it’s my conclusion that therapy and pharmaceutical drugs can be very helpful to anyone struggling with addiction.  But ultimately, it comes down to changing your behavior, actions, feelings and emotion.  That’s all I can control.  Taking a pill is not much different than the 15 years I spent “self medicating” myself with street drugs like cocaine, LSD psychedelic experience, hash, opium, hallucinogenic mushrooms, marijuana and alcohol.

Today, I still take drugs like caffeine in coffee and soda, sugar in candy and occasionally nicotine in cigarettes or cigars.  Ironically, when I last me with a psychiatrist he prescribed “anti- anxiety” medication. I firmly believe my #1 goal every day is to eat healthy and exercise. They told me when I was new, that I have a 3-fold disease—mental, physical and spiritual.

I try to watch what I eat (e.g. carbohydrates in bread and pasta versus McDonalds and Taco Bell).  As a matter of fact, I’m constantly learning new ideas from other people like the excerpts below.  I have never tried acupuncture because I’m not a big fan of needles, but I’m not ruling it out.

Hypoglycemia, also known as low blood sugar or low blood glucose, is when blood sugar decreases to below normal. This may result in a variety of symptoms including clumsiness, trouble talking, confusion, loss of consciousness, seizures, or death. A feeling of hunger, sweating, shakiness, and weakness may also be present. Symptoms typically come on quickly.

The most common cause of hypoglycemia is medications used to treat diabetes mellitus such as insulin, sulfonylureas, and biguanides. Risk is greater in diabetics who have eaten less than usual, exercised more than usual, or drunk alcohol. Other causes of hypoglycemia include kidney failure, certain tumors, liver disease, hypothyroidism, starvation, inborn error of metabolism, severe infections, reactive hypoglycemia, and a number of drugs including alcohol.  Low blood sugar may occur in babies who are otherwise healthy who have not eaten for a few hours. (Read more)

Hyperglycemia, or high blood sugar (also spelled hyperglycaemia or hyperglycæmia, not to be confused with the opposite disorder, hypoglycemia) is a condition in which an excessive amount of glucose circulates in the blood plasma.

Temporary hyperglycemia is often benign and asymptomatic. Blood glucose levels can rise well above normal for significant periods without producing any permanent effects or symptoms. However, chronic hyperglycemia at levels more than slightly above normal can produce a very wide variety of serious complications over a period of years, including kidney damage, neurological damage, cardiovascular damage, damage to the retina or damage to feet and legs. Diabetic neuropathy may be a result of long-term hyperglycemia.

Acute hyperglycemia involving glucose levels that are extremely high is a medical emergency and can rapidly produce serious complications (such as fluid loss through osmotic diuresis). It is most often seen in persons who have uncontrolled insulin-dependent diabetes.